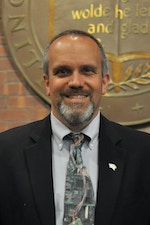 Dr. Gizzi has taught at Illinois State University since 2008, after spending 13 years at Mesa State College in Colorado. Dr. Gizzi is a political scientist with a focus on judicial process and constitutional law, and has taught criminal justice throughout his career. Dr. Gizzi is an avid photographer, biker, and technology enthusiast. He blogs on technology, privacy issues, law, and politics at www.professorgizzi.org

Dr. Gizzi's research focuses on the constitutional law of search and seizure (Fourth Amendment), supreme court decision-making, and wrongful conviction. He specializes in the law of vehicle searches and privacy. He is the author of The Fourth Amendment in Flux: The Roberts Court, Crime Control, and Digital Privacy (Univ. Press of Kansas, 2016) and The Web of Democracy: An Introduction to American Politics (Cengage, 2002, 2nd ed.).

College of Applied Science and Technology
2015

College of Applied Science and Technology
2012